Polybrominated diphenylethers (PBDEs) are used as flame retardants by the electronics industry and in a wide range of products including computers, white goods, car interiors, carpets and carpet underlay, polyurethane foams in furniture and bedding.

PBDEs have been shown to disrupt thyroid hormones, mimic oestrogen and are linked with cancer and reproductive damage. PBDEs are found in umbilical cord blood, breast milk, breast fat, as well as adult blood and fat. Studies have found the highest levels in children under 4-year-old.

PBDEs have also been detected in house dust at very high levels up to 25,000ppb due to the off gassing of treated products and furnishings. ‘Wipe samples’ from computers contained PBDEs in all sample.

In 2007, the Australian government released studies on PBDEs in Australian air and dust, the aquatic environment and blood.

PBDEs were detected in:

A 2005 study of Australian breastmilk had shown similar high levels of PBDE contamination. PBDEs have also been found throughout the environment and wildlife including birds, mammals, fish and marsupials.

DecaBDE was found in ‘relatively high level in the marsupials, Tasmanian Devils.

PBDEs have been sold in the following three commercial mixtures:

DecaBDE is the most commonly used flame retardant in electronic products. Deca-BDE has recently been shown to have the potential to break down in the environment and in animals to the smaller, more toxic penta-BDE that is more bioaccumulative in the environment.

Both PentaBDE and OctaBDE have been assessed by the Stockholm Convention’s Persistent Organic Pollutants Review Committee and found to be POPs. For more information visit International POPs Elimination Network (IPEN) 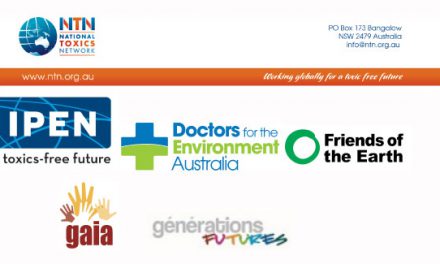